Have You Read Young Liars? 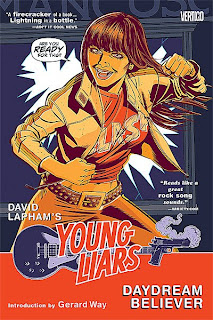 Who forgot to blog about Young Liars? That shit will get you FIRED. Reading Young Liars is like getting kicked in the nuts by a super-hot chick whose foot is wrapped in hundred dollar bills. From writer David Lapham (Stray Bullets, Murder Me Dead). A bunch of twenty-somethings conspire against one another, plot thefts, drink too much and tell horrible lies. This book is super graphic and makes me feel a little nauseous sometimes, but I love it.

HIGHLY RECOMMENDED!
Reviewed by sandeee at 11:55 AM No comments:

Hardboiled, crime-noir books are in no short supply. GOOD crime-noir books are a little more rare. I had given up on Criminal back in 2006, after the second or third issue, deeming it derivative and uninspired. I brushed off Christian and Curtis' repeated attempts to persuade me otherwise. I don't know what made me pick it back up, recently, almost exactly 2 years later. I have to admit that I've written off Ed Brubaker, despite enjoying his run on Captain America, and despite the fact that he is a very critically acclaimed comic book writer (having won two Eisner and Harvey awards in recent years.)

Every volume in the Criminal series is a separate story arc, containing new characters and new plot twists. The catch is that all of these characters, in all of these stories, are connected. Thematically, and dramatically, the series sits halfway between 100 Bullets and Sin City. As of yet, however, there are no mysterious government organizations like 100 Bullets, and the characters are a little more realistic and human than those in Sin City. The series feels a lot more plausible.

The characters are dark, but not flat. You aren't sure if you like all of them or not, but you want to. Try to limit yourself to one volume a week, as rushing through the series might leave you experiencing the world with a Frank Miller-esque inner monologue.

*Sensitive readers, please be advised. Strong language may be used to emphasize our passion for the comics we read.*

Welcome to We Read Comics, the comic review blog hosted by the Eisner Award winning Vault of Midnight. Thanks for joining us on this quest to unleash comic fury on the world.

This blog was inspired by a friendly challenge between Curtis Sullivan and christian Silbereis to see who could read the most comics in a week. It lead to an offhanded remark about doing a 2-3 line review of each comic read. And, here we are.

Lay it on us. And, all over the world.